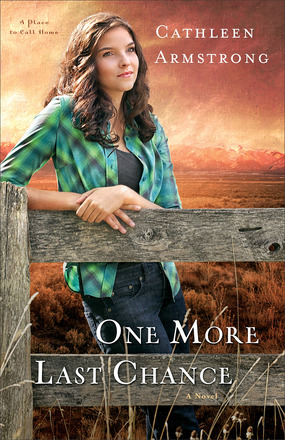 Some things never change . . . and some things change you forever.
Sarah Cooley has come home to Last Chance, New Mexico, for one reason--because it doesn't change. After a relationship gone bad with a man who wanted to change everything about her, Sarah is more than ready for the town whose motto may as well be, "If it ain't broke, don't fix it."

Chris Reed, on the other hand, wants nothing more than to spark some change in the little town. As the new owner of the Dip 'n' Dine, he's shaking things up to draw folks from all over the Southwest into his restaurant.

As it turns out, the winds of change are blowing into Last Chance--just not in the ways that Sarah or Chris might expect.

With the same evocative writing and charming characters that won fans for her debut novel, Cathleen Armstrong invites you back to Last Chance for a heartwarming, romantic story of two people navigating the twists and turns of life in a small town.

This was an enjoyable story set in the charming town of Last Chance.  I loved getting to know new characters while revisiting others I met in her first novel.  This book works fine as a stand-alone, but there are quite a few of the same characters in both books and I wouldn't recommend missing the first one because I just loved it!  I liked Sarah's sassiness and the care Chris shows for the people in his life. I did get frustrated with Sarah and her indecisiveness over a guy.  In this book, faith was more a part of their lives and there wasn't an issue to really work through.  I did wonder why Sarah didn't discuss faith with the guy she had been seeing for a long time; it sounded like they had never discussed it and that's an important thing to have clarified!  There's some romance, but the focus is more on good friends, great food and taking care of family.  I'm excited to read the next book, due out in a year!  I would recommend it if you like small-town stories with a dash of romance.

I received this book free from Revell in exchange for an honest review.
Posted by Shopgirl at 8:21 PM