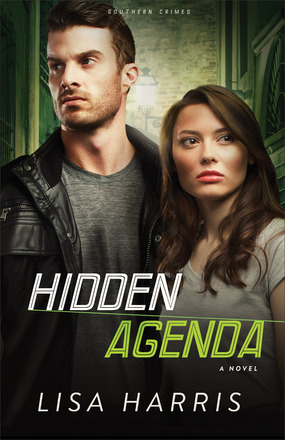 His cover is blown. Now his enemies are on his heels and closing in.
Michael Hunt is alive--and on the run. Presumed dead by friends and family, the undercover assignment he's been working for the past eight months has just been blown. With a hit out on his life and corruption inside the Atlanta police department, Michael finds himself hunted by both the cartel and the law. His only hope is Olivia Hamilton--the daughter of the man who wants him dead.

This nonstop chase from Christy Award-winning Lisa Harris will leave you breathless.

This was a suspenseful story with non-stop action!  I liked the action.  That being said, it felt too repetitive in what the characters were thinking, especially Olivia.  It was mentioned over and over that they had to find a list and had to save a certain person, that she wanted to discover the truth and put an end to all of this.  There were a few romantic moments, but they barely knew each other so it seemed too soon to have such strong feelings.  The faith element was good and I especially liked Michael's explanation about God walking with you through trials, but that doesn't mean it will turn out the way you want.  You might not get the answers you're looking for, but God was still good and still truth.  This works okay as a stand-alone, but the first two books were about Michael's sisters and besides appearing in this book as well, you get some of the back story to his situation in the first two books.  I enjoyed seeing his close-knit family again.  I really liked the first book in the series, but this one not as much.  If you enjoy romantic suspense, you might like it.