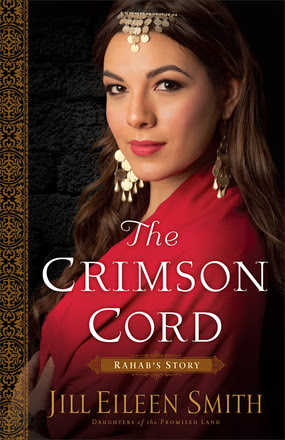 Wife to a gambler who took one too many risks, Rahab finds herself sold as a slave to cover her husband's debt. Forced into prostitution, she despairs of ever regaining her freedom and her self-respect. But when Israelite spies enter Jericho and come to lodge at her house, Rahab sees a glimmer of hope and the opportunity of a lifetime.

In one risky moment, she takes a leap of faith, puts her trust in a God she does not know, and vows to protect the spies from the authorities. When the armies of Israel arrive weeks later, Rahab hopes they will keep their promise, but she has no idea what kind of challenges await her outside Jericho's walls--or if she will ever know the meaning of love.

Under Jill Eileen Smith's talented hand, the familiar story of Rahab bursts forth in high definition. Immerse yourself in a world of dark and dusty streets, clandestine meetings, and daring escapes as a mysterious biblical figure claims her full humanity--and a permanent place in your heart.

This was an interesting and realistic view of what Rahab's life could have been like.  The book's divided into three parts, with the first part about Rahab's marriage and how she ended up in prostitution.  This section angered me because of how she was treated by her husband and the circumstances that led to her prostitution, and then what she had to suffer while a prostitute.  I felt this section went on for quite a while with no hopeful parts except you know how the end will be.  I liked parts 2 and 3 a lot more, with the actual saving of the spies and then her living at their camp.  I thought the issues Rahab struggled with were very realistic, the main one being her distrust of men.  Salmon, too, would struggle to accept her because of her profession.  I thought the themes of forgiveness, pride and realizing we're all sinners in need of grace were wonderfully done.  The romance had some sweet moments as they're drawn to each other, but both throw obstacles in the path due to fear and pride.  There was also a pretty cool twist in Rahab's story at the end, though I believe that was made up.  I thought Jill did a good job of bringing her story to life, though you have to read this knowing the parts not included in the Bible are not fact, but a best guess as to what her life could have been like.  I recommend it if you like Biblical fiction!