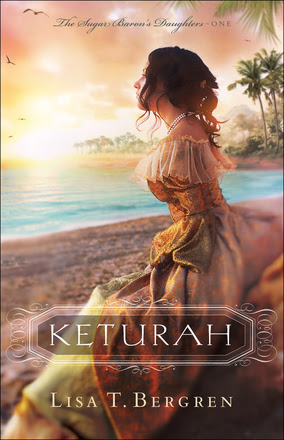 In 1772 England, Lady Keturah Banning Tomlinson and her sisters find themselves the heiresses of their father's estates and know they have one option: Go to the West Indies to save what is left of their heritage.
Although it flies against all the conventions, they're determined to make their own way in the world. But once they arrive in the Caribbean, conventions are the least of their concerns. On the infamous island of Nevis, the sisters discover the legacy of the legendary sugar barons has vastly declined-and that's just the start of what their eyes are opened to in this harsh and unfamiliar world.
Keturah never intends to put herself at the mercy of a man again, but every man on the island seems to be trying to win her hand and, with it, the ownership of her plantation. She could desperately use an ally, but even an unexpected reunion with a childhood friend leaves her questioning his motives.
To keep her family together and save the plantation that is her last chance at providing for them, can Keturah ever surrender her stubbornness and guarded heart to God and find the healing and love awaiting her?
My review:

This was a wonderful story set in such a fascinating time and place!  I loved learning more about the culture of the West Indies, how hard it was trying to not only survive but thrive on the sugar plantations with the unpredictable weather and fevers.  It was especially fascinating to see Keturah try to figure out this life as a woman and on her own.  She takes on the responsibility of turning the plantation around without really knowing anything about it and I admired her courage and gumption while also shaking my head at her naivete sometimes. I really admired how Keturah tried to have a positive attitude and count her blessings even when things were falling apart. She also could be very stubborn and wouldn't take the help offered but I could understand why she wouldn't.  Keturah survived an abusive marriage and I thought the author did a good job of showing her struggle emotionally with memories without being graphic about what she went through.  There were other hard things in the book, such as a man threatening the sisters and almost raping one, slaves being sold at a slave auction and a black man getting beaten pretty badly.  Nothing is described in very much detail but it gives you a sense of the hard life people led, partly because of where they were but also when they were.  They didn't have the type of justice system we do in America now and it's a scary thing not to know where to turn for help.  I really liked Gray, her childhood friend, and her two sisters were great, as well.  They were loyal, supportive and caring and I can't wait to read about their stories in the books to come!  The scenes were described wonderfully so that I felt like I was there.  A couple romances were sweet and I enjoyed watching Keturah's faith grow as she turned to God for strength and guidance after having been angry at Him for years.  I always enjoy Lisa's writing and this was no exception.  I highly recommend this book if you like historical fiction!
I received this book free from Bethany House Publishers in exchange for an honest review.