Enjoyable! 'A Perfect Weakness' - by Jennifer A. Davids 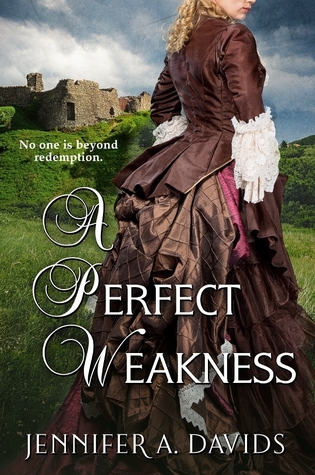 The Civil War left its mark on Dr. John Turner. He turns his back on medicine and sees his unexpected inheritance in England as an opportunity to start over. But he never imagines how God intends to use his new role as lord of Ashford Hall or the beautiful woman he finds there to ease his troubled soul.

A tragic loss led Penelope Howard to bury her heart and dreams in her work for the Hall and the village of Woodley. But the arrival of the new heir stirs not only her discarded longings but her compassion as well. What burden does he carry that he can't accept that grace covers the darkest of sins?

A deadly epidemic sweeps through Woodley revealing secrets which threaten everything. The doctor faces a choice: leave or dare to believe what the Lord whispers through the woman John has come to love.

No one is beyond redemption.

I enjoyed this story about redemption, grace and second chances!  I really liked that Penelope and John were shown as flawed people, both having made mistakes.  However, there was quite a difference between Penelope accepting God's forgiveness and John, who can't seem to believe he could ever be forgiven.  I couldn't help but wonder if he had ever read the Bible or really heard a sermon talking about grace and forgiveness.  People repeatedly tried to tell him but he just couldn't seem to listen so his stubbornness did frustrate me.  Other than that, I liked him pretty well and Penelope was incredibly caring and compassionate.  I admired her selfless attitude and strong faith as she hadn't had an easy life with what she had gone through and then how her father treated her afterwards.  There were some good romantic moments and some suspense as an epidemic breaks out that they're trying to stop.  It was interesting to see how doctors worked in the last half of the 1800's and how some could be stubborn in trying new methods or questioning years' old practices or possible causes.  I admired Arthur, John's stable boy, who was learning about medicine, as he did what had to be done twice at great risk to his potential career.  Overall, this book had a wonderful message and if you like historical romance, you should check it out!

I received this book from JustRead Tours,  I was not compensated for my review.  All opinions are my own.
Posted by Shopgirl at 6:14 PM