A Cast of Stones by Patrick W. Carr 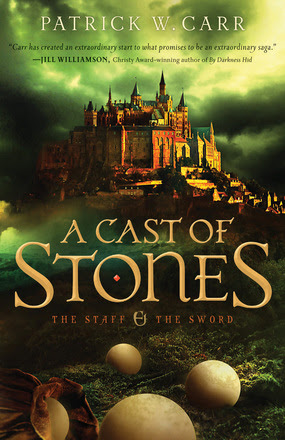 This is an interesting medieval fantasy about the transformation of a young man and his possible future role in the kingdom.  Errol Stone is a drunk who is pretty much ignored in his village of Callowford when he volunteers to deliver a message to a priest who lives in a treacherous woods for a fee.  He's almost killed by an assassin and has to run for his life with the priest and a few others.  Along the way we discover important insights into his past, meet people who would try to influence him for good or evil, and watch him mature into a true hero.

This is the first book in a trilogy and it was interesting to follow Errol through his adventures and see how he changed throughout the book.  I haven't read too many books considered to be medieval fantasy, so I wasn't sure quite what to expect.  I found it a little hard to get into it at first, but as Errol changed and the action continued, I became more interested.  I liked the different characters and the abilities shown were interesting to see.  The church is a powerful force in the story, with some priests good and some evil.  The Trinity is mentioned in the story and we clearly see good and evil, but a relationship with God isn't shown.  There's a lot of action and hints of romance.  I am interested to see where the next two go and if my guess about Errol's future comes true!

This book is available February 2013 from Bethany House Publishers.
Posted by Shopgirl at 8:53 PM