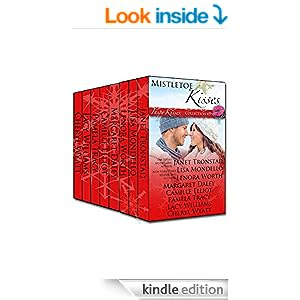 A new collection from some of your favorite inspirational authors:

From USA Today bestselling author Janet Tronstad, a new retro romance The Day Gina Rossi Lost Her Yet:
Gina Rossi has dreamed of being Marco Scaglia's sweetheart for as long as she can remember. But just when it looks like her dream might come true, her life gets crazy.

From New York Times and USA Today bestselling author Lisa Mondello, a new contemporary romance The Gift:
When Allison Jones finds a small envelope on the ground, CEO Derek Holden accuses her of stealing the money that was supposed to be inside. Knowing what the envelope means for a little girl, Allison is determined to not only fulfill the gift herself, but to prove to Derek that there is more to life than just money. Derek didn't need the simple conventions of life...until he met Allison. He soon learns that a bank account full of money is no match for a heart full of love...

From New York Times bestselling author Lenora Worth, a contemporary romance A Palm Tree Christmas:
When an overworked, heartbroken Atlanta nurse takes a holiday on the Gulf coast, she meets a widower with two adorable children and rethinks what love really means. Together, Clara and Hank rediscover Christmas and maybe the beginning of something more.

From Amazon bestselling author Margaret Daley, a new romantic suspense Deadly Holiday:
Tory Caldwell witnesses a hit-and-run, but when the dead victim disappears from the scene, police doubt a crime has been committed. Tory is threatened when she keeps insisting she saw a man killed and the only one who believes her is her neighbor, Jordan Steele. Together, can they solve the mystery of the disappearing body and stay alive?

From Carol Winner and CBA Bestselling author Pamela Tracy, a new historical romance Two by Two:
In 1880's Arizona Territory, Frank Barlett, a Yuma prison guard, heads to the mining town of Bisbee in order to bury his younger brother Jasper and see that his widow has safe passage home. The widow isn't who or what Frank expected and doesn't have a home to be escorted to. Emmaline Bartlett has a secret or two and every time Frank uncovers one, it's just one more reason he's got to protect her.

From award-winning author Camille Elliot, a new Regency romance The Spinster’s Christmas:
Spinster Miranda Belmoore and naval Captain Gerard Foremont, old childhood friends, meet again for a large Christmas party at Wintrell Hall. Miranda is making plans to escape a life of drudgery as a poor relation in her cousin’s household, while Gerard battles bitterness that his career was cut short by the injury to his knee. However, an enemy has infiltrated the family party, bent on revenge and determined that Twelfth Night will end in someone’s death ...

From fan favorite author Lacy Williams, a new contemporary cowboy romance Mistletoe Cowboy:
After suffering a career-ending injury, bull rider Justin Michaels has stalled out. At twenty-seven, he’s back in college to try and find direction for his life. Valri North is a few credits away from completing her pre-med degree. She’s got her life planned out, until a disastrous assignment in class and a distracting cowboy threaten to derail her carefully-ordered plans.

From award-winning author Cheryl Wyatt, a new contemporary romance A Refuge Christmas:
Refuge police officer Connor Stallings is facing the challenge of his career: new mayor Adrianna White, who wants to restructure his beloved town upside down. Adrianna’s heart is in the right place, but as she and the handsome police officer clash, they grow close enough to glimpse on their horizon a partnership of vows beyond helping the quirky but close-knit town.

This was a very enjoyable collection of Christmas romances!  I loved the varied time periods from the Regency era to the Old West to modern day.   The plots were interesting and unique and some more developed than others.  Some of the stories were more sweet and a couple were suspenseful.  Most of the characters were well-developed and real.  The writing was pretty well done, also.  It was cute how mistletoe was incorporated into each story.  The stories were clean with a few passionate kisses, but one did have a swear word.  A couple of the stories didn't really have any Christian elements while others had quite a bit.  This third collection is their best so far!  I highly recommend it!

I received a kindle copy of this book free in exchange for an honest review.