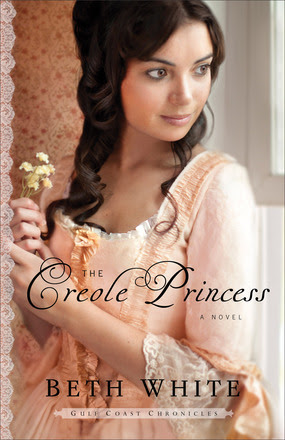 Torn between loyalties to family and flag, one young woman is about to discover that her most important allegiance is to her heart.
It is 1776, and all along the eastern seaboard the American struggle for independence rages. But in the British-held southern port of Mobile, Alabama, the conflict brewing is much quieter--though no less deadly.

Lyse Lanier may be largely French in heritage, but she spends most of her time in the company of the ebullient daughter of the British commander of Mobile. When a charming young Spanish merchant docks in town, Lyse is immediately struck by his easy wit and flair for the dramatic. But is he truly who he makes himself out to be? Spies abound, and Spain has yet to choose a side in the American conflict. Is Lyse simply an easy mark for Rafael Gonzalez to exploit? Or are his overtures of love as genuine as Spanish gold?

With spectacular detail that brings the cultural gumbo of the Colonial Gulf Coast alive, Beth White invites you to step into a world of intrigue and espionage from a little-known slice of the American Revolutionary War.

This was an amusing and interesting historical novel with a unique angle on the Revolutionary War.  Lyse and Rafael's relationship had a lot of fun banter and some romantic moments.  There was a lot of excitement with the war aspect and wondering who to trust.  Some had quite a balancing act to perform, whether just for their own safety or because they were trying to help a certain government.  I liked seeing different character's viewpoints and what they went through, from the wealthy to the slaves, British loyalists to American sympathizers. I really liked Lyse's friend, Daisy, and her struggle with loving a man her father didn't approve of and also questioning her long-held beliefs about freedom.  It was interesting to learn more about the Spanish and Creole cultures.  There's also talk of trusting God, that He's always with us and of prayer.  Sometimes it seemed like God's name was used a little loosely, though that could have been considered okay back then and wasn't meant disrespectfully.  I'm not sure;  I just tend to think it's better to err on the side of caution.  This book can be read as a stand-alone as book one was about a prior generation.  If you like historical romance, you should definitely check it out!