Enjoyable Romance! "Back in the Saddle - Double S Ranch 1 - by Ruth Logan Herne 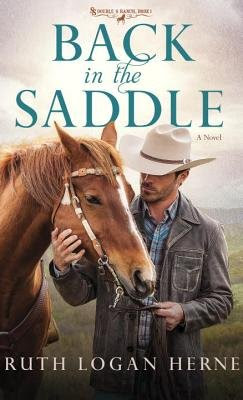 Colt Stafford has been trying to prove himself on Wall Street for years, but when his investments go south, he comes home with his tail between his legs.  His father and brother run the successful Double S ranch, but his father has developed some serious health problems and can't help with the busy calving season.  Colt comes home to help and regroup.  Ever since Colt's mother died when he was young, his father hasn't gotten along with anyone, including his two sons and a third boy he took in.  He's thrown himself into the ranch and making money.  His relationship with Colt, especially, is on rocky ground, but he's come back to his faith with his health scare and wants to make up for lost time.  Colt meets the house manager, Angelina, when she points a gun at him and can't help feeling drawn to her tough yet caring ways.  He also suspects she's hiding a secret.  His brother is busy with two little girls acting up after his wife walked out on them and helping to run the ranch.  A town tragedy forces the Stafford men to decide what's important in life and in their community.  Will Colt find his place on the ranch or does he belong back on Wall Street?  What is Angelina's secret and how will that impact her decisions about her future?

I enjoyed this cute romance about coming home and life on a ranch.  I liked seeing Colt evolve from a self-centered guy who only cared about money to starting to care about his family and community. It was interesting to see how Colt became so perceptive of other's feelings.  That was a unique touch I don't see often.  We see Colt's thought process as he starts to embrace the faith he lost, but he never really discussed it with Angelina and that's something I thought she should have clarified.  It was sweet to see the couple fall in love and try to figure out if they could overcome their obstacles.  There were also some really cute moments with the children in the story.  I recommend this book if you like sweet romances!

I received this book from Blogging for Books for this review.