30 Events That Shaped the Church - by Alton Gansky 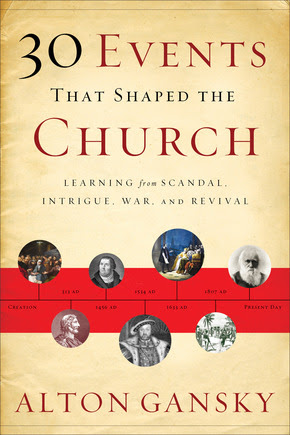 Uncover the surprising history of the Christian church
The church of today did not appear on the earth fully formed; rather, it developed over the centuries. Following Jesus' command to spread the gospel to the ends of the earth, the apostles and their spiritual descendants have grown the church through times of peace and times of war, through persecution and pilgrimage. The church that began as a ragtag group of Middle Eastern fishermen, tax collectors, and zealots became the multiethnic, multifaceted church we know today through historical events that, while they may seem distant, have a direct effect on our everyday lives.

Now thirty of these course-altering events are brought vividly to life by consummate storyteller Alton Gansky. Spanning twenty centuries of history, this lively book will entertain, educate, and enlighten you even as it enriches your appreciation for those who have come before us in the faith.

This book is incredibly informative and fascinating to read!  The events span from the Pentecost to the rise of New Atheism happening right now presented in order by year.  Some were good events, some bad, but all influenced the church in a major way.  Most of the events I'd heard of, but didn't know how much influence they had had on the church.  There's fascinating background on the people involved, motivations and consequences.  Some events frustrated me and made me angry for how people treated others and used the church for their own ends.  Others were happy events that also influenced the world for the better.  Each chapters averages about seven pages, so it's easy to read one here and there or many in one sitting.  I thought the writing was well done.  Gansky really kept my attention;  he's had lots of writing experience as the author of many books, mostly fiction.  I highly recommend this book if you're interested in church history or even history in general!

I received this book free from Baker Books in exchange for an honest review.