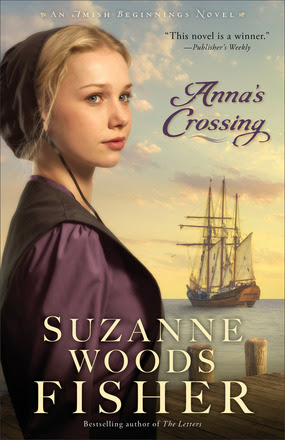 Some endings are really beginnings . . .

On a hot day in 1737 in Rotterdam, Anna König reluctantly sets foot on the Charming Nancy, a merchant ship that will carry her and her fellow Amish believers across the Atlantic to start a new life. As the only one in her community who can speak English, she feels compelled to go. But Anna is determined to complete this journey and return home--assuming she survives. She's heard horrific tales of ocean crossings and worse ones of what lay ahead in the New World. But fearfulness is something Anna has never known.

Ship's carpenter Bairn resents the somber people--dubbed Peculiars by the deckhands--who fill the lower deck of the Charming Nancy. All Bairn wants to do is to put his lonely past behind him, but that irksome and lovely lass Anna and her people keep intruding on him.

Delays, storms, illness, and diminishing provisions test the mettle and patience of everyone on board. When Anna is caught in a life-threatening situation, Bairn makes a discovery that shakes his entire foundation. But has the revelation come too late?

Bestselling author Suzanne Woods Fisher invites you back to the beginning of Amish life in America with this fascinating glimpse into the first ocean crossing--and the lives of two intrepid people who braved it.

I thought this story was fascinating and I learned a lot not only about life on a ship during this time, but also some of the history of the Amish church.  The author's note had a lot of great information, too.  The main characters were wonderful.  I liked Anna a lot and her determination to do the right thing no matter the cost to herself was very admirable.  Bairn was a very interesting character with his belief that God either doesn't exist or doesn't care, and yet he had this fascination with the Peculiars' faith and why they put others ahead of themselves.  The romance was very much an opposites attract situation at first, but then realizing maybe they're not so different after all.  There were some sweet moments to it.  There's a neat twist to the story, too.  I figured it out before it was revealed and I did think a couple aspects were far-fetched, but I do see how it could have happened that way.  I thought Suzanne did a good job of hinting at the twist and letting it play out slowly.  Felix, a boy in Anna's charge, is pretty amusing and very mischievous.  The story was told from their three viewpoints and I liked the variety.  This story had a different feel than most Amish fiction because of the different setting and time period.  It felt less Amish to me.  Faith is a very strong focus of the story as there are many situations Anna finds herself in which she's forced to decide if she'll follow God or put herself first.  She also has a few conversations with Bairn as he has questions about her faith.  There are some sad events in the book, but it didn't feel depressing.  The discussion questions were very insightful and really made me think.  I would highly recommend this book if you like Amish, romance or historical fiction.

Suzanne Woods Fisher is the bestselling author of the Lancaster County Secrets series, the Stoney Ridge Seasons series, and The Inn at Eagle Hill series, as well as nonfiction books about the Amish, including Amish Peace. She is also the coauthor of an Amish children's series, The Adventures of Lily Lapp. Suzanne is a Carol Award winner for The Search, a Carol Award finalist for The Choice, and a Christy Award finalist for The Waiting. She is also a columnist for Christian Post and Cooking & Such magazines. She lives in California. Learn more at www.suzannewoodsfisher.com and follow Suzanne on Twitter @suzannewfisher.
Posted by Shopgirl at 7:48 PM